Most proteins fold very robustly in the chaotic environment of the cell, and so it’s expected that there should be complex features that predict how the proteins folded configurations look. We still don’t know anything about the model AlphaFold used - other than it did very well on these 100 proteins - or how it was trained. There are a lot of questions of how it will work with more poorly behaved proteins - a wrong confident prediction could be much worse than no prediction. But it did get very good results, and with a very small amount of computational time to actually make the predictions. That raises a lot of hope for the scope of near-term future advances.

But as Aled Edwards points out on twitter, the real story here is one of long term, multi-decadal, investment in research infrastructure including research data infrastructure by the structural biology community. The protein data bank was set up 50 years ago (!!); and a culture of data sharing of these laboriously solved protein structures was set up, with a norm of contributing to (and helping curate) the data bank. That databank has been continuously curated and maintained, new techniques developed, eventually leading to the massive database now on which methods can be trained and results compared.

It’s the sustained funding and support - monetarily but also in terms of aligning research incentives like credit - which built the PDB. The other big story we heard this week tells us that you can’t just fund a piece of infrastructure, walk away, and expect the result to be self-sustaining. On December 1st, the iconic Arecibo Radio Telescope in Puerto Rico collapsed. The telescope was considered important enough to keep running - there was no move to decommission it until late November - but not important enough to keep funding the maintenance to keep it functioning. 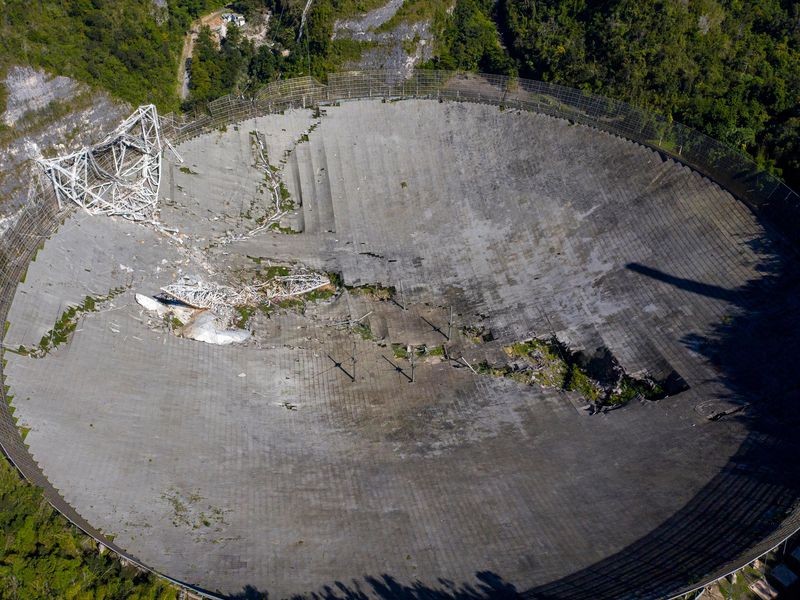 In the coming year, this newsletter will be spending some time giving research computing team managers the tools they need to make it as easy as possible for funders and adminstrators to make the right decisions and sustain our work.

For now, on to the link roundup!

The Power of Performance Reviews: Use This System to Become a Better Manager - Lenny Rachitsky, First Round Review

In one-on-ones, there should always be time to touch base on bigger picture items - career goals, finding out what your team members what to focus on, etc. But it’s good to have routine longer meetings taking a look back at the past months, and ahead to the next months, outside of the weekly cycle.

Since it’s end of year, there’s lots of management articles about annual performance reviews. I think both annual and performance are wrong here - annual is too seldom, and focussing on performance is a mistake. This is a good article on what’s good about this kind of meeting, though.

These can be really powerful ways to let your team members know what they’ve done that’s really valuable, to get aligned on what’s coming next, and talk about longer-term goals. In our own team we do them 3-4 times a year and I’ve found it works really well. We don’t rate performance or give scores - we look back on the past few months, note the team members accomplishments, compare them against the goals set, and then plan for the few months ahead. At least some team members quite like them and look forward to them - although initially there was some apprehension - and it’s a straightforward way to make sure you both have the same views about the future.

Managing Your Own Career

How to deprioritize tasks, projects, and plans (without feeling like you’re ‘throwing away’ your time and effort) - Jory MacKay, RescueTime

Focus is all about not doing things - which is tough in a research environment when there are so many interesting and valuable things that you could be doing! MacKay’s article summarizes some good strategies for not doing the right things.

A survey of more than 200 scientists at the Institute of Cancer Research suggested research could be delayed by six months, due to factors including the first lockdown and capacity limits

It’s worth emphasizing again that many of the researchers we support, even those who are who are doing pretty well now have fallen well behind where they would been. There may be opportunities to help them catch back up and take more of a collaborative role than just service oriented; and of those opportunities, some can be new services offered routinely in the future to other researchers.

This is an exciting development - starting July 2021, the journal eLife will only consider manuscripts published as preprints for publication. Journal submission will mainly consist of a link to bioRxiv or medRxiv preprints. As part of review, reviews will also be published when the article is published.

A nice story about how a class project turned into a first-author paper for PhD student Sam Kovaka - involving real-time analysis of data coming out from an Oxford Nanopore sequencer allowing selective sequencing - the nanopore can “spit out” sequences that have been rejected. This allows the sequencer to focus just on the sequences of interest - i.e. one kind of bacteria or not another, or even panels of human genes.

This is a really interesting diagram of how ARDC is thinking of research software:

Here's a preview of what we're thinking (high level) for a national agenda for #researchsoftware as a first class object @ARDC_AU. Feedback welcome pic.twitter.com/XtfwhK48DN 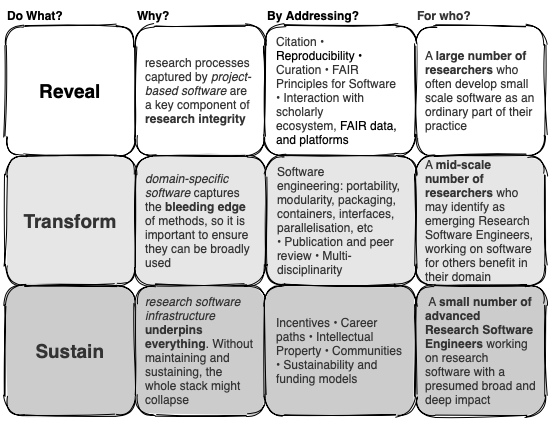 The approach is I think the right one, and one I’ve advocated before; taking a path-to-maturity model approach, where the levels are (in their terms, with my interpretations):

A nice article outlining how to write PRs to make them as easy review as possible - making them easier to approve. Good for individuals working on open source projects and for teams working together.

There are 13 steps there, but several I think deserve calling out:

One of the themes of this newsletter is that research computing systems, research software, and research data management are inextricably intertwined. While individual teams obviously focus on one part of the ecosystem, looking funding, policy, or staffing at any higher level, even within an institution or faculty just can’t succeed long term if it’s considering the different components individually.

This is an example of how organizations with quite different focuses are working together to provide more of that integrated view. Research data is increasingly preserved with the scripts needed to analyze and process the data; but the metadata needs for discovery and reusability of software are different than those of data. So the Software Heritage organization is working increasingly closely with the Research Data Alliance to connect those dots.

When AWS has an outage, it’s in the news and they publish public retrospectives (and here’s a great blog post of the retrospective of the Kinesis incident this week).

Our downtimes and failures don’t make the news, but we owe at least that same level of transparency and communication to our researchers. The technical details will differ from case to case. But what’s also needed is an apology, and some clear message that the team has learned something from the outage to make it less likely to recur. Fowler outlines what’s needed for such an apology:

In issue 49 we talked about the EOSC maturity checklist for software to be installed on the EOSC cloud; this talk by Theil covers the “why” of this approach and gives more details about the “what”.

Because of COVID, this lecture series is not only online but asynchronous and work-at-your-own-pace; but there is a support session where you can get help. There’s a nice mix of videos, PDF notes, and exercises. This mix of at-your-own-pace and video synchronous office hours could be a very useful model for other groups.

It’s not a super common use case, but if you’re supporting research groups which are actively curating a dataset and who want to be able to review changes, roll back, etc, there are several “databases, but with git-like version control” out there now that may be of interest. This New Stack article discusses TerminusDB, Dolt, and and others.

A talk extolling the virtues of a text-based markup format for publishing that’s ubiquitous in tech - even though it’s a little old now, nothing’s ever really surpassed it. I’m speaking, of course, about troff.

Everyone’s heard about this by now - Mac minis on AWS (not the M1s yet). What’s cool is they use AWS’s nitro, so you have bare metal access but can still, e.g., mount EBS volumes.

Finally, a gopher browser for the Nintendo Switch.

More reasons than you expect that SELECT * is bad for performance.